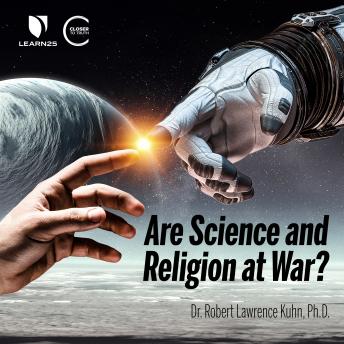 Are Science and Religion at War?

Why has science - religion dialogue gotten so heated? What do the world's leading experts see as the path forward?

For some, science and religion occupy separate, irreconcilable spheres. For others, they share a common goal: to explore big questions and synthesize knowledge.

Now, in this series of 17 one-on-one interviews, you have the privilege of hearing from leading voices in the debate. Most of the featured experts are professional scientists. While some consider religion irrelevant to science, many more find fulfillment in harmonizing their work with their beliefs.

Francis Collins is one such example. Once an atheist, Collins - the Director of the National Institutes of Health - now calls himself a believer. Best known for spearheading the Human Genome Project, Collins is adamant that reason is not the pure province of the scientific mind.

Ian Barbour is another example. A scholar on the relationship between science and religion, Barbour is credited with inaugurating the contemporary debate between the two fields through his Issues in Science and Religion (1966).

Meanwhile, Marvin Minsky - co-founder of the Massachusetts Institute of Technology's artificial intelligence laboratory - argues that religion and science should give each other a wide berth. According to science, all knowledge is provisional - subject to testing, revision, and refutation. In Minsky's view, theology is just the opposite.

As you listen to arguments from all sides, you'll rise above the hostility of the debate and see that, in the words of Dr. Robert Lawrence Kuhn, "the nexus of science and theology is the place where we explore human reality."

Are Science and Religion at War?