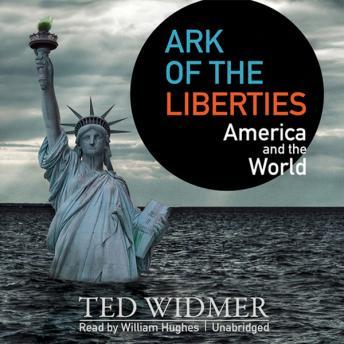 Ark of the Liberties: America and the World

"Long before there was an America, the dream of a land of freedom existed. A fantasy grew into a society, then a nation, and finally a superpower; yet the belief always lingered that liberty and America were one and the same. Often they were. But unattainable aspirations can be damaging. From the Puritans to Thomas Paine, from Woodrow Wilson to George W. Bush, Americans have believed that we have a mission to redeem the world. Pursuing that belief has led to forced efforts that are inconsistent with a true definition of liberty.

With wit, brilliance, and deep affection, Ted Widmer traces America's incomparable history, from its soaring moments to its less glorious ones, in a celebratory critique that aims to help us know ourselves a little better."

"In this exploration of the United States' promotion of liberty across the globe, Ted Widmer offers an examination of our history that should influence the way we think about our place in the 21st-century world. At a time when we need to restore America's standing in so many places, Ark of the Liberties shows us how we can do it if we remain true to our historic ideals."-Bill Clinton

Ark of the Liberties: America and the World