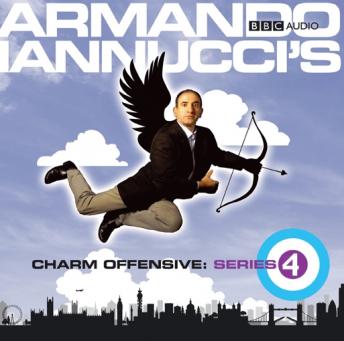 Creator of 'The Thick of It' & 'I'm Alan Partridge', Armando Iannucci hosts the complete 4th series of his award-winning show. Series guests include Phill Jupitus, David Mitchell, Dave Gorman, Dara O'Briain, Miranda Hart and Chris Addison ('In The Loop'). Armando Iannucci and his guests pull apart the news with a heady mix of topical comedy, messed-about archive, chat and outrageous fibs, recorded in front of a live studio audience. Across the series, with Britain looking forward to the 2012 Olympics they'll be considering possible new sporting events such as Single Mumming, 4 x 100 Teenage Pregnancies & Turkey Twizzling. Plus they study some interesting animal facts such as 'Plankton always drift anti-clockwise, and form giant funny faces when no-one's looking' and 'Young adult pigs have started to emulate human behaviour by eating rubbish, drinking a lot and getting slaughtered'. Another episode sees the collapse of the financial markets and the team ask who they'd like to see collapse next?. 'I'd like to see Hallmark collapse, like a house of cards' and 'I'd like to see Damien Hirst collapse. In front of me. So I could then sell his skull at auction' are just two of the answers... And further, in the week where Barack Obama said to Sarah Palin 'You can't put lipstick on a pig' our panel realize animal metaphors are this season's must have and are hotter than a peacock on a spacehopper. Other exciting new modern maxims include 'You can't put a wig on a goldfish' and 'Too many cooks are on the telly'. 'The best comedy on radio' - The Independent.