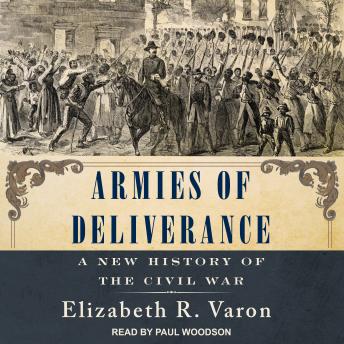 Armies of Deliverance: A New History of the Civil War

Loyal Americans marched off to war in 1861 not to conquer the South but to liberate it. So argues Elizabeth R. Varon in Armies of Deliverance, a sweeping narrative of the Civil War and a bold new interpretation of Union and Confederate war aims. Northerners imagined the war as a crusade to deliver the Southern masses from slaveholder domination and to bring democracy, prosperity, and education to the region. As the war escalated, Lincoln and his allies built the case that emancipation would secure military victory and benefit the North and South alike. The theme of deliverance was essential in mobilizing a Unionist coalition of Northerners and anti-Confederate Southerners.

Confederates, fighting to establish an independent slaveholding republic, were determined to preempt, discredit, and silence Yankee appeals to the Southern masses. In their quest for political unity Confederates relentlessly played up two themes: Northern barbarity and Southern victimization. Casting the Union army as ruthless conquerors, Confederates argued that the emancipation of blacks was synonymous with the subjugation of the white South.

Armies of Deliverance: A New History of the Civil War