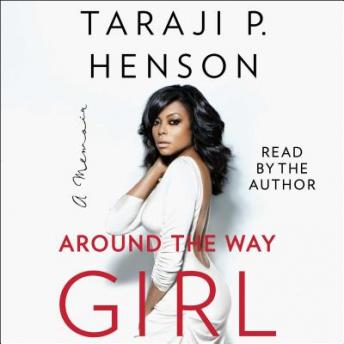 Around the Way Girl: A Memoir

From Taraji P. Henson, Academy Award nominee, Golden Globe winner, and star of the award-winning film Hidden Figures, comes an inspiring and funny memoir—“a bona fide hit” (Essence)—about family, friends, the hustle required to make it in Hollywood, and the joy of living your own truth.

With a sensibility that recalls her beloved screen characters, including Katherine, the NASA mathematician, Yvette, Queenie, Shug, and the iconic Cookie from Empire, Taraji P. Henson writes of her family, the one she was born into and the one she created. She shares stories of her father, a Vietnam vet who was bowed but never broken by life’s challenges, and of her mother who survived violence both at home and on DC’s volatile streets. Here, too, she opens up about her experiences as a single mother, a journey some saw as a burden but which she saw as a gift.

Around the Way Girl is also a classic actor’s memoir in which Taraji reflects on the world-class instruction she received at Howard University and how she chipped away, with one small role after another, at Hollywood's resistance to give women, particularly women of color, meaty significant roles. With laugh-out-loud humor and candor, she shares the challenges and disappointments of the actor’s journey and shows us that behind the red carpet moments, she is ever authentic. She is at heart just a girl in pursuit of her dreams in this “inspiring account of overcoming adversity and a quest for self-discovery, written with vitality and enthusiasm” (Shelf Awareness).

Love hearing the story in her voice!! It's one thing to hear it in audio but to actually hear her words in her voice really peaked my interest.

amazing book! I loved hearing her story. what a woman. love me some Taraji

Taraji P. Henson is my role model. I'm an actor too and it felt so relatable, honest and true to heart. Her story is not only inspiring but motivating. I loved that she read the book herself because It put me right in her life. I heard what she heard, I hurt when she hurt felt what she felt and I felt we traveled her journey together. I loved it and I already recommended it to a good friend of mine and she loved it. DEFINITELY A MUST READ NOW! What are you waiting for? GOOO!!!!

Phenomenal! Not only does Ms. Henson provides the reader a visual of each event growing into her career, she forces you to be apart of it with her exceptional storytelling skills! One of my fave reads of 2022!

I love Taraji!!!! Her energy and storytelling is phenomenal

Taraji is amazing. Such an honest and brave live she has gone through. Respect!

Taraji gives us history, sisterhood, self-love, a birds eye into her life, real ish throughout this book. Black single moms, our children especially the black boys and us not being married and having the audacity to have and raise that child as though we aren't capable. When in fact single motherhood is the makeup of majority households. She addressed how the world no longer see a black boy as a kid after the age of 10, hence Tamir Rice. She also talked about growing up in a single mother household and seeing all the sacrifices her mother made. She even addressed her son's father being abusive and how he stopped being around once she broke up with him, and how her father held him accountable by being a positive role model and showing him the ropes he needed to be right in his son's life. He told him not to let anger/pride control his life. Little did we know when she played in "Baby Boy" she was imitating art. Each project/movie she played she was dealing with a trauma in her life. I wonder if they pushed or made her performances excel. No matter how many times you fall from grace, no one's perfect, you just gotta get up! Taraji my sister, I see myself in her. I smiled so much throughout this book. Whew although heavy, emotional her story, her life is beautiful. She also addressed how so many women and Black actors are paid less than their counterparts. It took Tyler Perry who have her just due in work and pay, not an Oscar nomination. #AMustRead #Illprobablyreaditagain #Book13of2021 #whatsnext #bookworm

Listening to her read her story brought it to life even more. Some parts really hitting home. It was like she was sitting her telling me the story face to face.

I really enjoyed this book. Taraji truly let's us readers in to her past, and present without sugar coating anything. I am in awe of her will to push through pain and keep on going. I love her as an actress and was definitely impressed with this book. It wouldn't have the same impact. Hearing the words that are written from the heart spoken by that person is amazing. Almost like you're face to face and they're telling you and only you that story. This book made me appreciate and love her even more. Can't wait to see more of her future work.