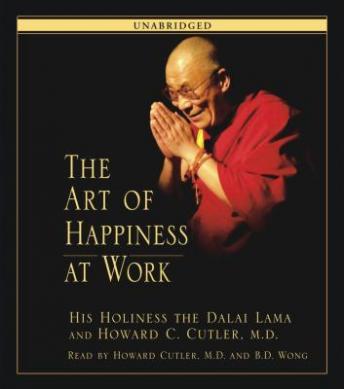 The Art of Happiness at Work

Written By: His Holiness The Dalai Lama, Howard C. Cutler

For the first time since The Art of Happiness, His Holiness the Dalai Lama has teamed up with psychiatrist Howard Cutler to continue the discussion about what makes life meaningful.
In conversations with the Dalai Lama over the past several years, Howard Cutler has asked the questions we all want answered about how to find happiness in the place we spend most of our time -- work. Beginning with the basic need to find satisfaction in our careers, Dr. Cutler questions His Holiness about the nature of work. In psychiatry and according to the Dalai Lama, our motivation for working determines our level of satisfaction. The Art of Happiness at Work explores these three levels of focus:
• Survival: focus on salary, stability, food and clothing • Career: focus on advancement • Calling: focus on work as a higher purpose
Dr. Cutler probes the Dalai Lama's wisdom by posing these questions: What is the relationship between self-awareness and work? How does lack of freedom at work affect our levels of happiness? How can we deal with boredom or lack of challenge? Job change and unemployment? How much of our misery comes from our identity being tied up with work?
Dr. Cutler walks us through the Dalai Lama's reasoning so that we may know how to apply his wisdom to daily life. The Art of Happiness at Work is an invaluable source of strength and peace for anyone who earns a living.

Art of Happiness at Work

by His Holiness The Dalai Lama, Howard C. Cutler