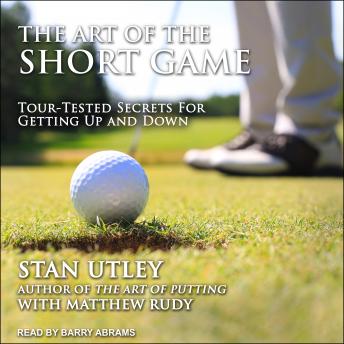 The Art of the Short Game: Tour-Tested Secrets for Getting Up and Down

Veteran golfers know that the secret to a lower score is a solid short game, but mastering those small strokes can be maddening-even for the pros. One of golf's most revered instructors, Stan Utley now reveals the step-by-step tactics behind his revolutionary short-game techniques in The Art of the Short Game.

After introducing listeners to his groundbreaking philosophy that explains why most players don't see all the shots available to them near the green, Utley moves on to shatter conventional wisdom about stance, grip, and ball position. From choosing the right clubs (including a checklist of must-haves that should always be in your bag) to spin reduction during chipping and fearless sand play, The Art of the Short Game demystifies the most aggravating shots on the links. Though Utley's primer features a full set of drills, accompanied by more than seventy-five photos, his approach is far removed from the monotonous, mechanical instruction of yesteryear.

Giving a time-tested secret weapon to every golfer at every level, Utley's short-game methods turn trouble shots into triumph.

Art of the Short Game: Tour-Tested Secrets for Getting Up and Down