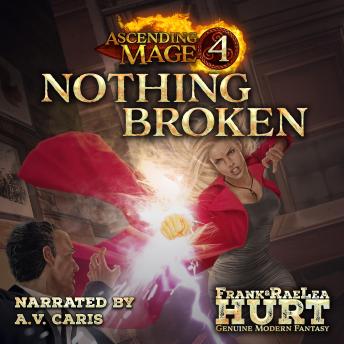 Narrated By: A. V. Caris

Her changeling friends are imprisoned. To free them, she’ll have to break the laws of magic.

Ember Wright managed to save her friends’ lives, only to see them locked up and tormented. With each passing day, the changelings weaken and submit to their interrogators. Secrets start to slip.

Running out of options and allies, Ember turns to an ancient, forbidden form of advanced magic. Her reluctant teacher’s warning echoes in her head: almost all mages who attempt the spell become corrupted by it.

Complicating matters, her overbearing mother decides to come visit—in the middle of a crisis. What could possibly go wrong?

As though an answer to Ember’s desperate prayers, an otherworldly force reveals itself. Will this new power be her greatest weapon? Or will it be her ultimate undoing?

Ascending Mage 4: Nothing Broken is page-burning modern fantasy action adventure with a kick-ass heroine and magic that will grab you by the throat.

﻿WARNING: this contemporary magic thriller story is written for mature audiences who like realistic dark fantasy; it contains adult language and graphic depictions of violence.

This title is due for release on January 24, 2020
We'll send you an email as soon as it is available!