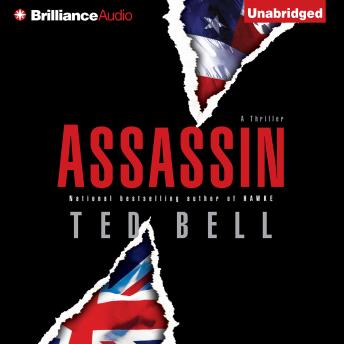 In an elegant palazzo on the Grand Canal, an American ambassador's tryst turns deadly. In the seamy underbelly of London, a pub-crawling killer is on the loose. And in a storybook chapel nestled in the Cotswolds, a marriage made in heaven turns to hell on earth. Isolated incidents? Or links in a chain of events hurtling towards catastrophe? So begins Assassin, the tour de force thriller that heralds the return of every terrorist's worst nightmare, Alex Hawke.

A shadowy figure known as the Dog is believed to be the ruthless terrorist who is systematically and savagely assassinating American diplomats and their families around the globe. As the deadly toll mounts inexorably, Hawke, along with former NYPD cop and Navy SEAL Stokely Jones, is called upon by the U.S. government to launch a search for the assassin behind the murders.

Hawke, who 'makes James Bond look like a slovenly, dull-witted clockpuncher' (Kirkus Reviews), is soon following a trail that leads back to London in the go-go nineties, when Arab oil money fueled lavish, and sometimes fiendish, lifestyles. Other murky clues point to the Florida Keys, where a vicious killer hides behind the gates of a fabled museum. And to a remote Indonesian island where a madman tinkers with strains of a deadly virus and slyly bides his time.

Hawke must call upon resources deep within himself. He must enter a race against time to stop a cataclysmic attack on America's most populous cities and avenge the inexplicable and horrific crime that has left him devastated.

A great story, and a superb reader. Narrator John Shea really makes the characters come alive. I replayed several sections of the story just to relisten to his wonderful charaterizations.

Assassin is action from the beginning! It contains events that can take place in our times. It really makes you think about the unspeakable horrors others are willing to inflict on Americans, because we don't believe the way they do or share their oppression and disgust with our way of life.Great charcters! Great story! Very exciting! A+

I have become a fan of Ted Bell - A tad long, but great story.

So far - a typical English spy mystery which delivers suspense without too much sentimentality.

I liked the main characters very much .. . but the bits with the villain were excessively bloody and violent and I gave it up--who needs it?

This title is due for release on June 29, 2005
We'll send you an email as soon as it is available!