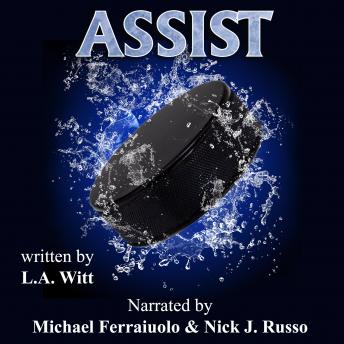 A rookie, his teammate, and his best friend from a rival team. What could possibly go wrong?
Seattle Snowhawks rookie Justin Reid has it bad for his teammate Shawn Kelleher. It’s just his luck that Shawn’s got a crush too… on Justin’s best friend, Vancouver Narwhal center Keith Adams.
When Shawn lets it slip at the worst possible moment that he wants Keith, Justin is hurt, but what can he do? He steers Keith in Shawn’s direction and lets chemistry do the rest.
What Justin doesn’t know is that while Keith is into Shawn, he’s also secretly wanted Justin since forever. After some stumbling, they realize there’s something very hot and very mutual going on between all three of them. It’s fantasies coming true left, right, and center, and it just doesn’t get any better than this.
Except this scorching hot triad is anything but simple. Not while the closeted son of a hockey legend is fighting to make his own name in the shadow of his deeply homophobic father’s legacy. Not in the midst of grueling schedules and a team’s fraternization rules. Throw in pesky emotions showing up where they aren’t wanted, and it’s a play that’s doomed from the start.
Shawn, Keith, and Justin all fought their way into professional hockey. Is what they have together worth fighting for too? Or will fear let heartache win this game?
ASSIST is approximately 117,500 words. It's book 2 of the Pucks & Rainbows series, and can be read as a standalone.