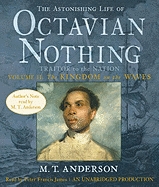 The Astonishing Life of Octavian Nothing, Traitor to the Nation, Volume 2: The Kingdom on the Waves

Such is our task, and such lies before us all: Liberty or Death.

In the summer of 1775, fleeing from a death sentence, Octavian and his tutor, Dr. Trefusis, escape through rising tides and pouring rain to find shelter in British-occupied Boston. Sundered from all he knows Octavian hopes to find safe harbor. But in the midst of war, no place is safe. The city of Boston itself is under siege. What follows is a tale of skirmish and flame, flight and fury, and battle on sea and land. Seeking both the truth of his past and some hope for his future, Octavian encounters generous thieves, pious carpenters, delicate lords, noble cowherds, bedazzled scientists, and murderous rebels–as this astonishing narrative escalates to its startling climax.

Astonishing Life of Octavian Nothing, Traitor to the Nation, Volume 2: The Kingdom on the Waves