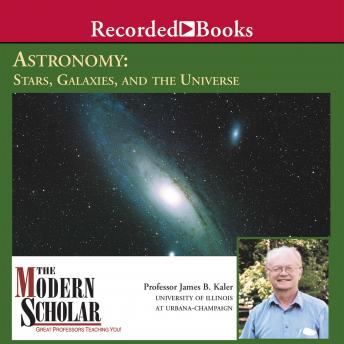 As huge and prominent as it appears to us, our planet and solar system are but small parts of our galaxy, a massive assembly that spatters the sky with billions of stars and that extends away from us for tens of thousands of light years. And this galaxy of ours is in turn but a small portion of the universe of trillions of other galaxies that reaches outward for billions of light years, back to the dawn of time. This course places our local solar system into the greater context to show where it all came from and what its fate may be. We will study our sun and its interior, learn about stellar red giants, white dwarfs, neutron stars, and black holes, and encounter the mysteries of dark matter and dark energy. We explore the natures of the stars, what different kinds there are, what makes them shine, how they are born, and how they die, some with a whimper, others with explosions that rock the cosmos. We then look to our galaxy of stars, and then to the great variety of other galaxies, to their clusters, and to their fiery interactions and collisions. Finally, we encounter the universe as a whole, the collection of all there is, which is still expanding from its Big Bang origin of nearly 14 billion years ago.