At Close Quarters: PT Boats in the United States Navy 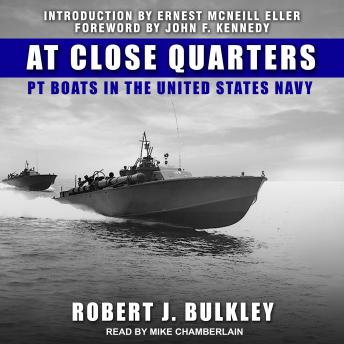 Small though they were, PT boats played a key role in World War II, carrying out an astonishing variety of missions where fast, versatile, and strongly armed vessels were needed. Called 'weapons of opportunity,' they met the enemy at closer quarters and with greater frequency than any other type of surface craft. Among the most famous PT commanders was John F. Kennedy, whose courageous actions in the Pacific are now well known to the American public. The author of the book, another distinguished PT boat commander in the Pacific, compiled this history of PT-boat operations in World War II for the U.S. Navy shortly after V-J Day, when memories were fresh and records easily assessable.

Bulkley provides a wealth of facts about these motor torpedo boats, whose vast range of operation covered two oceans as well as the Mediterranean and the English Channel. Although their primary mission was to attack surface ships and craft close to shore, they were also used effectively to lay mines and smoke screens, to rescue downed aviators, and to carry out intelligence and raider operations. The author gives special attention to the crews, paying well-deserved tribute to their heroism, skill, and sacrifice that helped to win the war.

At Close Quarters: PT Boats in the United States Navy