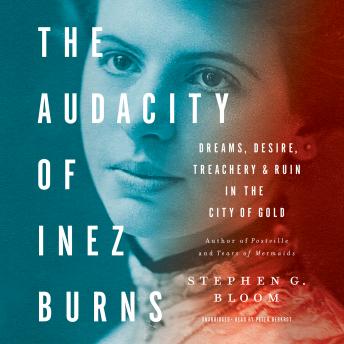 The Audacity of Inez Burns: Dreams, Desire, Treachery, and Ruin in the City of Gold

San Francisco, until the mid-1940s, was a city that lived by its own rules, fast and loose. Formed by the gold rush and destroyed by the 1906 earthquake, it served as a pleasure palace for the legions of men who sought their fortunes in the California foothills. For the women who followed, their only choice was to support, serve, or submit.

Inez Burns was different. She put everyone to shame with her dazzling, calculated, stone-cold ambition.

Born in the slums of San Francisco to a cigar-rolling alcoholic, Inez transformed herself into one of California’s richest women, becoming a notorious power-broker, grand dame, and iconoclast. A stunning beauty with perfumed charm, she rose from manicurist to murderess to millionaire, seducing one man after another, bearing children out of wedlock, and bribing politicians and cops along the way to secure her place in the San Francisco firmament.

Inez ruled with incandescent flair. She owned five hundred hats and a closet full of furs, had two small toes surgically removed to fit into stylish high heels, and had two ribs excised to accentuate her hourglass figure. Her presence was defined by couture dresses from Paris, red-carpet strutting at the San Francisco Opera, and a black Pierce-Arrow that delivered her everywhere. She threw outrageous parties on her sprawling, eight-hundred-acre horse ranch, a compound with servants, cooks, horse groomers, and trainers, where politicians, judges, attorneys, Hollywood moguls, and entertainers gamboled over silver fizzes.

Inez was adored by the desperate women who sought her out—and loathed by the power-hungry men who plotted to destroy her.

During a time when women risked their lives with predatory practitioners lurking in back alleys, Inez and her team of women, clad in crisp, white nurse’s uniforms, worked night and day in her elegantly appointed clinic, performing fifty thousand of the safest, most hygienic abortions available during a time when even the richest wives, Hollywood stars, and mistresses had few options when they found themselves with an unwanted pregnancy.

Inez’s illegal business bestowed upon her power and influence—until a determined politician by the name of Edmund G. (Pat) Brown—the father of current California Governor Jerry Brown—used Inez to catapult his nascent career to national prominence.

In The Audacity of Inez Burns, Stephen G. Bloom, the author of the bestselling Postville, reveals a jagged slice of lost American history. From Inez’s riveting tale of glamour and tragedy, he has created a brilliant, compulsively readable portrait of an unforgettable woman during a moment when America’s pendulum swung from compassion to criminality by punishing those who permitted women to control their own destinies.