Audobiography: The Story of My Life & Work 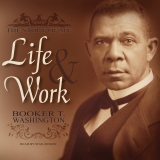 Booker T. Washington (1856-1915) was one of the most influential African American leaders of the late nineteenth and early twentieth centuries. Born a slave in Hale's Ford, Virginia, Washington moved to West Virginia after the Civil War, where he learned to read while working in a coal mine. After several years of part-time schooling, he enrolled full-time at the Hampton Institute, a secondary school for African Americans, and graduated in 1875. Washington spent the next six years teaching school in West Virginia and at Hampton before accepting an offer to start a brand new school in Tuskegee, Alabama. Washington founded what is today Tuskegee University in 1881 and spent the rest of his life making that institution financially viable and academically respected. First published in 1900, The Story of My Life and Work was ghostwritten for Washington by a young African American journalist named Edgar Webber. Webber wrote the book with minimal oversight from Washington, who was on a European tour when his autobiography was sent to the publisher in the summer of 1899.

Audobiography: The Story of My Life & Work