The Autoimmune Fix: How to Stop the Hidden Autoimmune Damage That Keeps You Sick, Fat, and Tired Before It Turns Into Disease 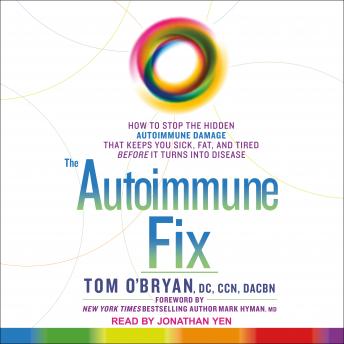 Millions of people suffer from autoimmunity whether they know it or not. The root cause of most weight gain, brain and mood problems, and fatigue, autoimmunity can take years-or even decades-for symptoms and a clear diagnosis to arise. Through years of research, Dr. Tom O'Bryan has discovered that autoimmunity is actually a spectrum, and many people experiencing general malaise are already on it. And while autoimmune diseases, such as Alzheimer's, Multiple Sclerosis, osteoporosis, diabetes, and lupus, have become the third leading cause of death behind heart disease and cancer, many people affected are left in the dark.

The good news is that many autoimmune conditions can be reversed through a targeted protocol designed to heal the autoimmune system, 70 percent of which is located in the gut. The Autoimmune Fix includes two comprehensive 3-week plans: In the first 3 weeks, you'll follow a Paleo-inspired diet during which you cut out gluten, sweets, and dairy-the three primary culprits behind autoimmunity. Once the dietary changes have been addressed, The Autoimmune Fix focuses on the other causes of autoimmunity, such as genetics, other dietary issues, and microbiome.

Autoimmune Fix: How to Stop the Hidden Autoimmune Damage That Keeps You Sick, Fat, and Tired Before It Turns Into Disease