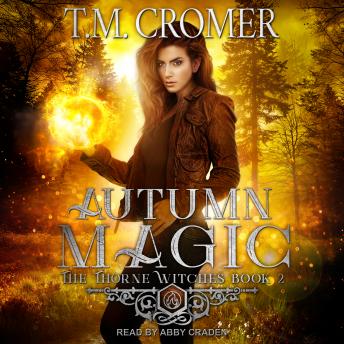 Autumn Thorne believed she discovered the perfect love. Yet the moment she revealed she was a witch, her relationship went to hell in a handbasket. Nearly a decade later, in an ironic twist of fate, the man who shunned her shows up on her doorstep and asks for her help to develop his own latent powers.

For the better part of nine years, Keaton Carlyle has tried to forget the one woman whose very touch made him burn with uncontrollable desire. Now, left with no choice, he must seek her out to master the magic building within. But the more time Keaton spends with Autumn, the more he realizes his old feelings for her have never truly been extinguished and the flames blaze hotter than ever.

When Autumn sets off on a mission to uncover an ancient artifact crucial to saving her mother, Keaton is hot on her heels, determined to make up for the wrongs of the past and rescue Autumn from the clutches of the madman holding her hostage. Faced with life or death, they must learn to work together. But can Autumn ever again trust the man who so cruelly betrayed her?