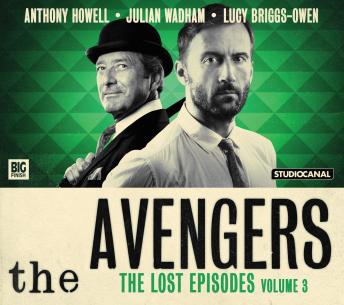 The Avengers - The Lost Episodes Volume 03

When an incomprehensible tragedy strikes on what should have been the happiest day of David Keel's life, he is left traumatised. Confronted with an apparently motiveless crime, he feels compelled to investigate and is drawn into London's seedy underworld of drug smuggling. As he digs deeper and deeper, his only hope may be a mysterious gentleman who appears to know more than he says. Together, will they be able to avenge the crime?

Still on the trail of the men who wrecked his life, Dr Keel gets to know his new associate, John Steed, rather better as they infiltrate warring gangs running amok in the betting community. Lies and double crosses stack up on every side, and it's impossible to know who to trust. As the race nears its fatal finish, has Dr Keel gambled on the wrong side?

Following the death of a colleague, Steed goes undercover amongst a group of forgers. As the stakes get higher, his risk of discovery increases and Dr Keel may be his only chance to escape alive. But with the formidable thug known as the Cardinal watching their every move, could Steed be dooming them both?

4. One for the Mortuary

It should have been an easy day for David Keel. A short flight and a conference to attend. But John Steed's arrival disrupts everything, as usual. Without even knowing, he finds himself at the centre of an international conspiracy. The chase is on to preserve and protect a valuable medical formula, and with an assassin on their trail, our heroes find themselves enmeshed in an intricate web of laundry, taxidermy and murder.

Written By: Adapted by John Dorney
Directed By: Ken Bentley