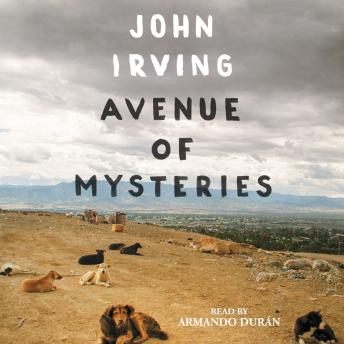 John Irving returns to the themes that established him as one of our most admired and beloved authors in this absorbing novel of fate and memory.

In Avenue of Mysteries, Juan Diego—a fourteen-year-old boy, who was born and grew up in Mexico—has a thirteen-year-old sister. Her name is Lupe, and she thinks she sees what’s coming—specifically, her own future and her brother’s. Lupe is a mind reader; she doesn’t know what everyone is thinking, but she knows what most people are thinking. Regarding what has happened, as opposed to what will, Lupe is usually right about the past; without your telling her, she knows all the worst things that have happened to you.

Lupe doesn’t know the future as accurately. But consider what a terrible burden it is, if you believe you know the future—especially your own future, or, even worse, the future of someone you love. What might a thirteen-year-old girl be driven to do, if she thought she could change the future?

As an older man, Juan Diego will take a trip to the Philippines, but what travels with him are his dreams and memories; he is most alive in his childhood and early adolescence in Mexico. As we grow older—most of all, in what we remember and what we dream—we live in the past. Sometimes, we live more vividly in the past than in the present.

Avenue of Mysteries is the story of what happens to Juan Diego in the Philippines, where what happened to him in the past—in Mexico—collides with his future.