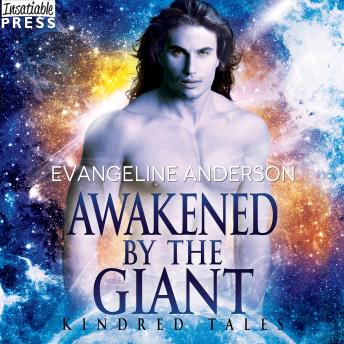 Awakened by the Giant: A Kindred Tales Novel (Brides of the Kindred)

Awakened by the Giant--a Kindred Tale of the Jor'gen KindredA Giant Kindred devoted to scienceClones a beautiful woman to learn from herBut what Maddy teaches Calden is how to loveAnd love is forbidden--punishable by DeathCan they escape now that Maddy has been...Awakened by the Giant?Meet the Jor’gen Kindred. After leaving the main Mother Ship centuries ago to make a genetic trade with a massive race of people, they are thirty percent bigger than their ancestors. Which makes them 9 feet tall—giants to regular sized humanoids. Hundreds of years after the genetic trade which made them so huge, the Jor’gen Kindred have no more females and are seeking a new people to trade with--All but CaldenBelieving he doesn't need a female in his life to be happy, Calden moves to the Mentat Space Station to devote his life to biological research through cloning. The Station is ruled by a harsh taskmaster--an AI called FATHER who forbids any females. But Calden doesn't care, as long as he is allowed to clone and study as many specimens as he wants.Then one day, the recovery droids find something new--the remains of a sentient human female and the ship she crashed in. Consumed by scientific curiosity, Calden gets special permission to make a clone of the dead woman--he doesn't know she will cause him to break the rules and risk his career and even death...when he falls in love with her.Madeline Harris has no idea what's going on. She wakes up in a vat of green goo with her memories fractured, surrounded by the big, scary Mentats of the Station. Then a giant comes to save her. It doesn't take much for her to fall for Calden but she doesn't realize that the station is a hostile place for women...or that she could be in big trouble if the AI, FATHER, discovers how very much Calden cares for her in return.Will they escape the Mentat Station in time to save Maddy's life? And will she ever forgive Calden for keeping deadly secrets from her?You'll have to read Awakened by the Giant to find out...

Awakened by the Giant: A Kindred Tales Novel (Brides of the Kindred)