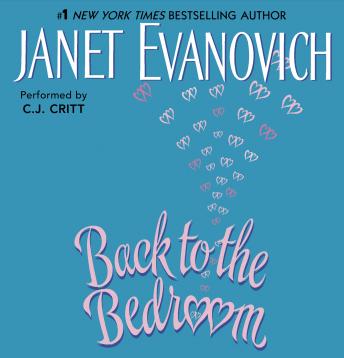 Back to the Bedroom

BACK TO THE BEDROOM

She was the mysterious woman in the long black cloak. He was the sexy guy next door. They shared a common wall between their Capitol Hill townhouses and not much else—until disaster scored a direct hit on the mystery woman’s bedroom and the sexy guy’s heart. He baked her a cake, she learned to throw a football, there were some misunderstandings in the living room, some mishaps in the yard, and some romantic moments everywhere...

THE ROCKY ROAD TO ROMANCE

When the delightful, daffy Dog Lady of station WZZZ offered to take on the temporary job of traffic reporter, Steve Crow tried to think of reasons to turn Daisy Adams down. Perhaps he knew that sharing the close quarters of a car with her for hours would give the handsome program director no room to resist her quirky charms. He always favored low-slung sports cars and high-heeled women, but that was before he fell for a free spirit who caught crooks by accident, loved old people and pets, and had just too many jobs! Loving Daisy turned Steve’s life upside down, especially once he adopted Bob, a huge dog masquerading as a couch potato…

Back to the Bedroom

This title is due for release on August 2, 2005
We'll send you an email as soon as it is available!