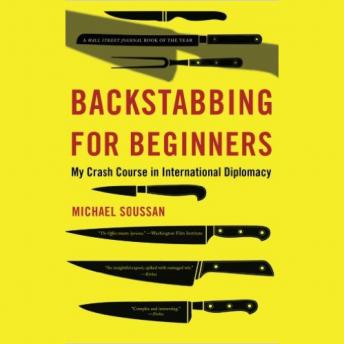 Backstabbing for Beginners: My Crash Course in International Diplomacy

Soon to be a major motion picture starring Ben Kingsley and Theo James, the gripping true story of a young program coordinator at the United Nations who stumbles upon a conspiracy involving Iraq's oil reserves.

A recent Brown University graduate, Michael Soussan was elated when he landed a position as a program coordinator for the United Nations' Iraq Program. Little did he know that he would end up a whistleblower in what PBS NewsHour described as the 'largest financial scandal in UN history.'

Breaking a conspiracy of silence that had prevailed for years, Soussan sparked an unprecedented corruption probe into the Oil-for-Food program that exposed a worldwide system of bribes, kickbacks, and blackmail involving ruthless power-players from around the globe.

At the crossroads of pressing humanitarian concerns, crisis diplomacy, and multibillion-dollar business interests, Soussan's story highlights core flaws of our international system and exposes the frightening, corrupting power of the black elixir that fuels our world's economy.

Backstabbing for Beginners: My Crash Course in International Diplomacy