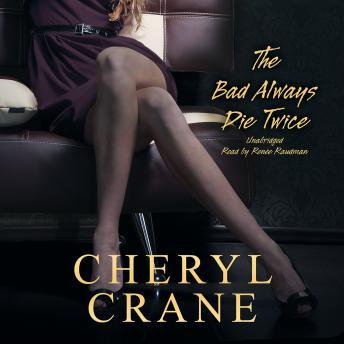 Set in Hollywood, The Bad Always Die Twice is the first of a wildly entertaining series set amidst the bright lights, big egos, and Botoxed brows of Hollywood. It is partly the glitz and glamour of Jackie Collins novels and partly the LA streets of hard-boiled James Ellroy. Who better to tell this tale than Cheryl Crane, daughter of Hollywood legend Lana Turner and actor-restaurateur Joseph Stephen Crane? Cheryl was involved in the Johnny Stompanato scandal of the same period. She allegedly killed the hoodlum because he threatened to kill her mother.
This mystery features Nikki Harper, the daughter of a screen goddess, who is raised in a completely dysfunctional home populated by a cast of crazies but who did not follow in her mother’s footsteps. Instead, Nikki is a real estate agent who wants a quiet, comfortable life with a little love and happiness thrown in.
Up until now, Nikki always thought that dead meant dead. But then, film icon Rex March turns up freshly murdered in the bed of Nikki’s best friend after being reported dead six months ago. A little distrustful of law enforcement, Nikki feels compelled to solve the murder on her own. Her acquaintances range from the pinnacle of Hollywood royalty to the bottom of Tinseltown’s barrel, including a not-so-grieving widow, a conniving younger lover, a best friend with secrets, a jilted mistress, a “closeted” confidante, a wacky neighbor, and a scheming business partner. Rex has a gaping hole where his eye used to be, and Nikki knows a lot of people with motives for the murder. The killer is getting ready for a repeat performance, so Nikki must act fast before her own screen fades to black.