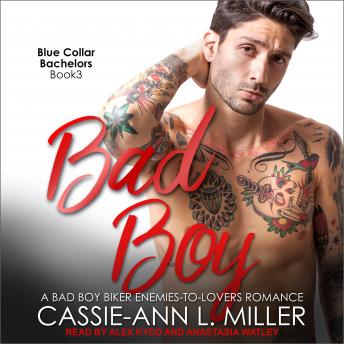 A good girl. A bad boy. Business and pleasure collide.

My life was meticulously organized, painstakingly structured, and impeccably sanitary . . . until he rolled into town with his bad manners, his short temper and his cocky smirk. Now, he's opened up his grungy barbershop right next door to my pristine cupcake shop, bringing along his clientele of sketchy, leather-loving motorcycle guys with broken noses.

He's infuriating. Having him around brings out the worst in me. All of a sudden, I'm acting on impulse. First, I'm flinging a handful of over-ripe raspberries at his back. Then, I'm screwing him on the countertop between the cash register and the cakepop display.

Waking up with a blanked-out memory on his threadbare sheets is unquestionably the low-point of my life. Except now, the only thing I hate more than Clinton himself is the fact that I'm starting to fall head over heels for him.

He has a secret that will rock the foundation of all the things I believe in. But it's foolish to jump to conclusions because, in some stories, it's not easy figuring out exactly who the bad guy is.