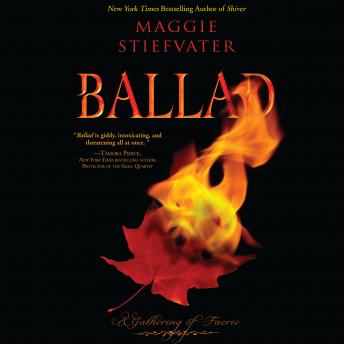 Ballad: A Gathering of Faerie

FROM THE AUTHOR OF THE NEW YORK TIMES BESTSELLING NOVEL SHIVER
'Ballad is giddy, intoxicating, and threatening all at once. ―Tamora Pierce
Remember us, so sing the dead, lest we remember you
James Morgan has an almost unearthly gift for music. And it has attracted Nuala, a soul-snatching faerie muse who fosters and then feeds on the creative energies of exceptional humans until they die. James has plenty of reasons to fear the faeries, but as he and Nuala collaborate on an achingly beautiful musical composition, James finds his feelings towards Nuala deepening. But the rest of the fairies are not as harmless. As Halloween―the day of the dead―draws near, James will have to battle the Faerie Queen and the horned king of the dead to save Nuala's life and his soul.
Praise for Ballad:
'Readers of Holly Black's Tithe (2002) or Charles de Lint's The Blue Girl (2004) will enjoy this rich foray into faerie. The book's backdrop, so firmly rooted in Celtic myth, is scary, mysterious, magical, and horrifying.'―Booklist

Ballad: A Gathering of Faerie