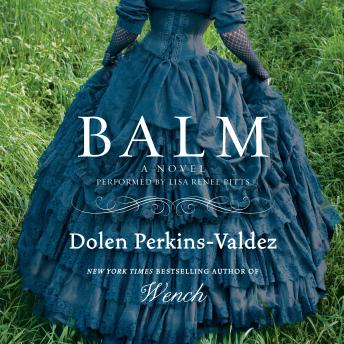 The New York Times bestselling author of Wench returns to the Civil War era to explore the next chapter of history—the trauma of the War and the end of slavery—in this powerful story of love and healing about three people who struggle to overcome the pain of the past and define their own future.

The Civil War has ended, and Madge, Sadie, and Hemp have each come to Chicago in search of a new life.

Born with magical hands, Madge has the power to discern others’ suffering, but she cannot heal her own damaged heart. To mend herself and help those in need, she must return to Tennessee to face the women healers who rejected her as a child.

Sadie can commune with the dead, but until she makes peace with her father, she, too, cannot fully engage her gift.

Searching for his missing family, Hemp arrives in this northern city that shimmers with possibility. But redemption cannot be possible until he is reunited with those taken from him.

In the bitter aftermath of a terrible, bloody war, as a divided nation tries to come together once again, Madge, Sadie, and Hemp will be caught up in a desperate, unexpected battle for survival in a community desperate to lay the pain of the past to rest.

Beautiful in its historical atmosphere and emotional depth, Balm is a stirring novel of love, loss, hope, and reconciliation set during one of the most critical periods in American history.