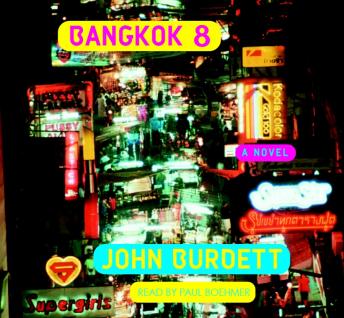 A thriller with attitude to spare, Bangkok 8 is a sexy, razor-edged, often darkly hilarious novel set in one of the world’s most exotic cities.

Witnessed by a throng of gaping spectators, a charismatic Marine sergeant is murdered under a Bangkok bridge inside a bolted-shut Mercedes Benz. Among the witnesses are the only two cops in the city not on the take, but within moments one is murdered and his partner, Sonchai Jitpleecheep—a devout Buddhist and the son of a Thai bar girl and a long-gone Vietnam War G.I.—is hell-bent on wreaking revenge. On a vigilante mission to capture his partner’s murderer, Sonchai is begrudgingly paired with a beautiful FBI agent named Jones and captures her heart in the process. In a city fueled by illicit drugs and infinite corruption, prostitution and priceless art, Sonchai’s quest for vengeance takes him into a world much more sinister than he could have ever imagined.