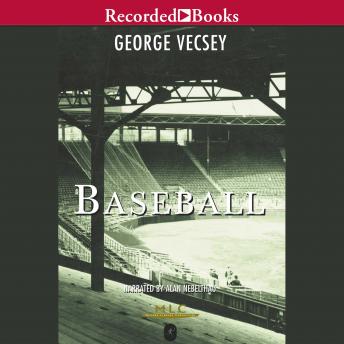 Best-selling author George Vecsey is an esteemed and award-winning sports journalist for the New York Times. In Baseball, he recounts the history of America's national pastime. Baseball has been around in various forms for thousands of years, but within the last 200 years it has become an American institution. Growing from a sport played in open fields and in big city streets, baseball has seen its share of innovators and detractors, heroes and villains. Vecsey details them all from the scandalous Black Sox of 1919 and modern steroid abusers to icons like Babe Ruth, Jackie Robinson, and the countless underdogs that came out of nowhere to capture the imaginations of fans everywhere. As with each Modern Library Chronicle, Vecsey's Baseball is a concise history filled with details and stories that will appeal to rookie and veteran fans alike. Narrator Alan Nebelthau's warm voice punctuates all of the wit and charm of Vecsey's prose. Baseball: A History of America's Favorite Game is an invitation to [Vecsey's] house for Sunday dinner. The pace is more relaxed, the meal much larger, the result as wonderful as you suspected it would be.-Leigh Montville