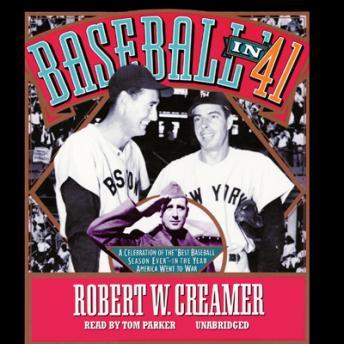 It was the year that Joe DiMaggio set his 56-game hitting streak, that Ted Williams batted .406, that the Dodgers and the Yankees battled each other in a classic World series-and that the United States went to war.
In this look at what he calls "the best baseball season ever," Robert Creamer skillfully intertwines all these epochal baseball happenings with an informal history of a pivotal period in American life, as well as with his own memories of what it was like to be eighteen and a baseball fan when the game he loved vied for his attention with a looming war.
For all who love baseball, Baseball in '41 makes it clear why the game is still the purest representation of the American Dream.