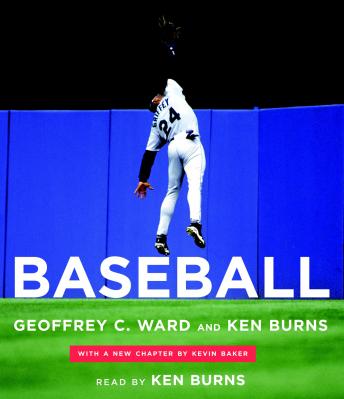 The companion to Ken Burns’s magnificent PBS television series—updated and expanded to coincide with the broadcast of a new, two-part Tenth Inning directed with Lynn Novick.

The authors of the acclaimed and bestselling The Civil War, Jazz, and The War turn to another uniquely American phenomenon: baseball. Geoffrey C. Ward and Ken Burns’s moving and fascinating history of the game goes beyond stolen bases, double plays, and home runs to demonstrate how baseball has been influenced by, and has in turn influenced, American life. The audiobook covers every milestone of the game: from the rules drawn up in 1845 by Alexander Cartwright to the American League’s introduction of the designated hitter in 1973; from the 1924 Negro World Series to Jack Roosevelt Robinson’s major-league debut, from the first curve ball in 1867 to Nolan Ryan’s seventh and last no-hitter in 1991. This new edition brings the authors’ monumental work into the twenty-first century: steroids, home-run records, the rise of Latino players, the long-awaited Red Sox World Series victory, and so much more. Baseball is an audiobook that speaks to all Americans.