Basilica: The Splendor and the Scandal: Building St. Peter's 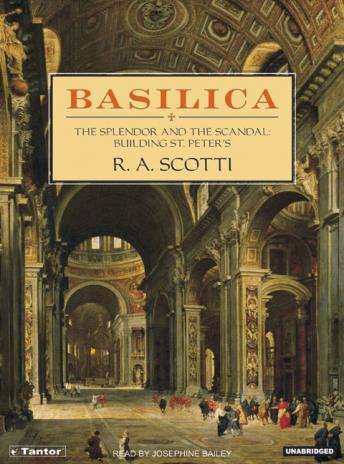 Written By: R. A. Scotti

It was the splendor-and the scandal-of the age. In 1506, the ferociously ambitious Renaissance Pope Julius II tore down the most sacred shrine in Europe-the millennium-old St. Peter's Basilica built by the Emperor Constantine over the apostle's grave-to build a better basilica. Construction of the new St. Peter's spanned two centuries, embroiled twenty-seven popes, and consumed the genius of the greatest artists of the age-Michaelangelo, Bramante, Raphael, and Bernini. The cost of building the new cathedral was costly in more than just monetary terms-the new basilica provoked the Protestant Reformation, dividing the Christian world for all time.

In this swift, colorful narrative, R. A. Scotti brings to life the artists and the popes, the politics and the passions behind this audacious enterprise. Scotti turns sacred architecture into a spellbinding human epic of enormous daring, petty jealousy, and staggering genius.

Basilica: The Splendor and the Scandal: Building St. Peter's

This title is due for release on July 14, 2006
We'll send you an email as soon as it is available!