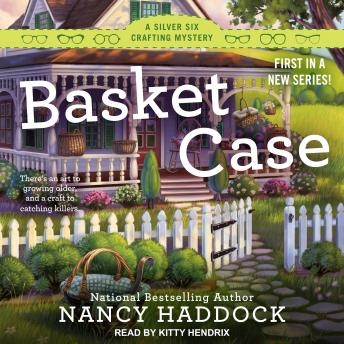 There isn't much crime in Lilyvale, Arkansas, but local authorities have their hands full with Ms. Sherry Mae Stanton Cutler and her housemates-a crafty group of retirees who've dubbed themselves the Silver Six. But when Sherry Mae's niece, Nixy, arrives to keep them in line, Lilyvale also plays host to a killer.

When Leslee Stanton 'Nixy' Nix gets the latest call from Lilyvale detective Eric Shoar, she knows it means trouble. There's been another kitchen explosion at her Aunt Sherry's farmhouse, and the dreamy-voiced detective has had enough. If Nixy doesn't check on her aunt in person, the Silver Six could become wards of the court. But the trouble Nixy finds in Lilyvale is not at all what she expects.

The seniors are hosting a folk art festival at the farmhouse, featuring Sherry's hand-woven baskets, when land developer Jill Elsman arrives to bully Nixy's aunt into selling the property. When Jill is later found dead in the cemetery, Sherry is suspected of weaving a murder plot, and it's up to Nixy and the Silver Six to untangle the truth.