Basketball: Which Position Should You Play?: The Positions of 'Positionless' Basketball and Where You'll Fit In 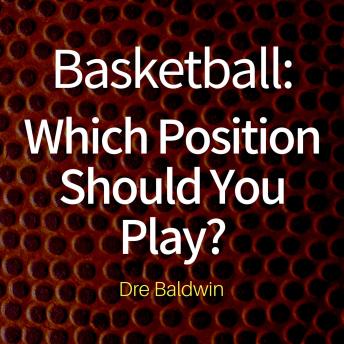 Using Which Position Should I Play?, you will know:
Best utilize your skills to help a team Play your ideal position Describe your game to an interested coach or scout Contribute consistently to a team In basketball, unlike hockey, soccer, and baseball, any player can do anything. Score in the post. Dribble. Shoot the ball. Guard whomever has the ball on the opposition. Unlike a soccer midfielder, who cannot use his hands like the goalie, or a baseball shortstop, who can't throw pitches to the batter, a basketball player, as long as he is on the court, can perform any function the game requires. Anyone can move to any spot on the floor, and the same rules apply to every player regardless of size or designated position (if any).
To this idea, basketball is and has always been "positionless," but it is still useful to have a general idea of what your game is. The better you know your own game, the more easily you fit into a role on a team. The better you know your own game, the better you can sell yourself to a coach or general manager who's looking to fill his roster. The better you know your own game, the more easily you can look at a game situation, see what is needed, and contribute.
Even at the professional level, some coaches still want more structure: They will designate positions for players and sometimes define (or confine) players' roles based on those positions. This helps the coach maintain order and helps a coach hold players accountable for certain jobs on the court. It's not right nor wrong: On a basketball team, a coach is the boss, and the boss makes the rules.
You want to know which skills to develop next, and you want that skill to seamlessly blend with your other skills. Plus, you may be a member of one of these more structured teams now or in the future.

Basketball: Which Position Should You Play?: The Positions of 'Positionless' Basketball and Where You'll Fit In