Battle For Sanskrit : Is Sanskrit Political or Sacred? Oppressive or Liberating? Dead or Alive? 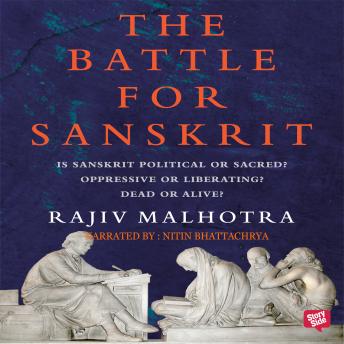 There is a new awakening in India that is challenging the ongoing Westernization of the discourse about India. Battle for Sanskrit seeks to alert traditional scholars of Sanskrit and sanskriti – Indian civilization – concerning an important school of thought that has its base in the US and that has started to dominate the discourse on the cultural, social and political aspects of India. The scholars of this field hold that many Sanskrit texts are socially oppressive and serve as political weapons in the hands of the ruling elite; that the sacred aspects need to be refuted; and that Sanskrit has long been dead. The traditional Indian experts would outright reject or at least question these positions. Is each view exclusive of the other, or can there be a bridge between them? ©Harper Collins India 2018

Battle For Sanskrit : Is Sanskrit Political or Sacred? Oppressive or Liberating? Dead or Alive?

This title is due for release on February 2, 2019
We'll send you an email as soon as it is available!