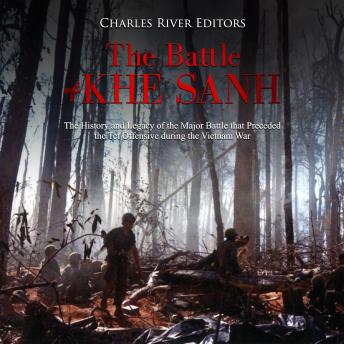 The Battle of Khe Sanh: The History and Legacy of the Major Battle that Preceded the Tet Offensive during the Vietnam War

Key to both sets of plans was an American base in the extreme northwest of South Vietnam, close to Laos and part of a chain of US and ARVN (South Vietnamese military) bases designed to screen the South from direct invasion by the North. This base bore the name of a town at its location, Khe Sanh. Whether as a jumping off point for potential American operations in Laos, or a relatively isolated target for a sudden offensive, Khe Sanh entered the thoughts of planners on both sides as 1967 drew to a close. As a result, a long siege, punctuated by shorter, more bloody encounters, developed in the early days of 1968.

Nearly 50 years after the fighting, the Battle of Khe Sanh and the Tet Offensive continue to inspire impassioned and occasionally bitter debates among historians, military officers, government officials, veterans, journalists, and the public at large. Perhaps the only proposition to win universal agreement is that the fighting at the start of 1968 represented a significant turning point. The conflict in Vietnam would continue for years, but it would never be the same.

The Battle of Khe Sanh chronicles one of the most controversial battles of the war, and the effects it had on both sides.

Battle of Khe Sanh: The History and Legacy of the Major Battle that Preceded the Tet Offensive during the Vietnam War