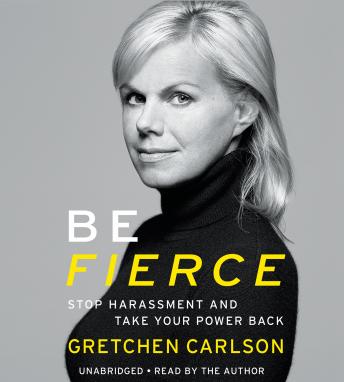 Be Fierce: Stop Harassment and Take Your Power Back

A groundbreaking manifesto from journalist Gretchen Carlson about how women can protect themselves from sexual harassment in the workplace and reclaim their power against abuse or injustice.In BE FIERCE, Gretchen shares her own experiences, as well as powerful and moving stories from women in many different careers and fields who decided they too weren't ready to shut up and sit down. Gretchen became a voice for the voiceless.
In this revealing and timely book, Gretchen shares her views on what women can do to empower and protect themselves in the workplace or on a college campus, what to say when someone makes suggestive remarks, how an employer's Human Resources department may not always be your friend, and how forced arbitration clauses in work contracts often serve to protect companies rather than employees. Her groundbreaking message encourages women to stand up and speak up in every aspect of their lives.
Gretchen also discusses why this fight will require both women and men working together to ensure that our daughters and sons will have a brighter future.
BE FIERCE is a cultural movement and a motivating testament to what we can accomplish if we collectively decide to become warriors in the path for a better future.The time is now. Take back your life, your career, and your dignity.
Twitter: @GretchenCarlsonFacebook: @GretchenCarlsonInstagram: @therealgretchencarlson
A portion of each book sale will go towards Gretchen's Gift of Courage fund.
'Using your voice and speaking your truth is a step toward freedom. Be a 'Fierce' force because that's what it takes to change the world.'--Maria Shriver, Emmy and Peabody Award-winning journalist, New York Times bestselling author, and founder of The Women's Alzheimer's Movement

Be Fierce: Stop Harassment and Take Your Power Back