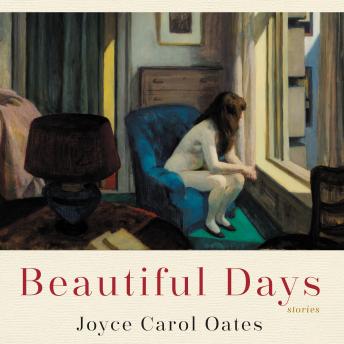 The diverse stories of Beautiful Days, Joyce Carol Oates explore the most secret, intimate, and unacknowledged interior lives of characters not unlike ourselves, who assert their independence in acts of bold and often irrevocable defiance.

“Fleuve Bleu” exemplifies the rich sensuousness of Oates’s prose as lovers married to other persons vow to establish, in their intimacy, a ruthlessly honest, truth-telling authenticity missing elsewhere in their complicated lives, with unexpected results.

In “Big Burnt,” set on lushly rendered Lake George, in the Adirondacks, a cunningly manipulative university professor exploits a too-trusting woman in a way she could never have anticipated. “The Nice Girl” depicts a young woman who has been, through her life, infuriatingly “nice,” until she is forced to come to terms with the raw desperation of her deepest self. In a more experimental but no less intimate mode, “Les beaux jours” examines the ambiguities of an intensely erotic, exploitative relationship between a “master” artist and his adoring young female model. And the tragic “Undocumented Alien” depicts a young African student enrolled in an American university who is suddenly stripped of his student visa and forced to undergo a terrifying test of courage.

In these stories, as elsewhere in her fiction, Joyce Carol Oates exhibits her fascination with the social, psychological, and moral boundaries that govern our behavior—until the hour when they do not.