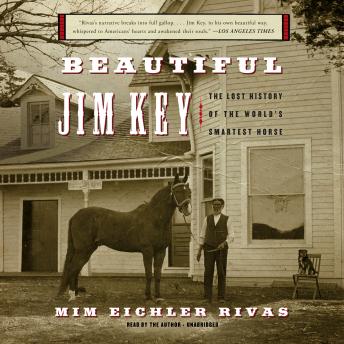 The horse Jim was known as Beautiful Jim Key from the moment he stepped into the American spotlight in 1897 at age eight until his death in 1912. This horse was beloved for his remarkable intelligence, cultivated by human kindness and patience. Proclaimed a genius, a leader of his species, the smartest horse who ever lived, with an IQ the equivalent of a twelve-year-old human, Jim Key appeared to read, write, spell, do mathematics, tell time, sort mail, use a cash register and a telephone, cite bible passages by chapter and verse, and engage in political debate. Jim Key and his owner travelled the country performing these tricks, and whether true or not, the public believed it was so.

No less extraordinary was the man who trained Jim, Dr. William Key of Shelbyville, Tennessee, a former slave who in his life had seen horrific cruelty toward humans and animals. Bill Key was a self-schooled veterinarian and Black entrepreneur who refused to use force in any guise while breaking and training horses. It was thanks to this rare and intimate relationship between horse and man, championed by a second man named Albert R. Rogers-inventor, philanthropist, and founding member of the American Humane Society-that the animal rights movement was legitimized and born into the twentieth century.