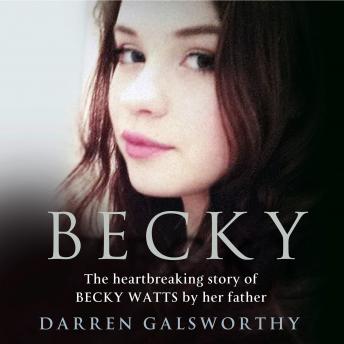 Becky: The Heartbreaking Story of Becky Watts by Her Father Darren Galsworthy

This is the heartbreaking story of the murder of 16-year-old Bristol schoolgirl Becky Watts, a personal and heartfelt account of a crime that shocked the nation in a unique way and tore a family in two.

A vulnerable and shy girl, Becky Watts was brutally murdered and dismembered by her own step-brother on 19 February 2015. As her father Darren discovered the horrific details of what happened to his darling girl, his world fell apart.

Writing about his darkest hours and unbearable pain, Darren uncovers what Becky's relationship with her step-brother Nathan, a child he had raised as his own son, was really like. He recalls the devastation of discovering the truth about the depravity with which Becky was torn from him in the safety of her own home. And he recounts the torment of the legal battle to see his step-son sentenced to life behind bars.

But, at its heart, Becky is a poignant personal story, a chance for Darren to pay tribute to his darling daughter, to celebrate her life and take back control of how she is remembered.
Darren recalls with enduring love the daughter he fought so hard to get custody of after she was taken into foster care as an infant; the happy child who completed his life; and the innocent schoolgirl who brought joy and happiness to all her knew her.

Both heartfelt and haunting, searingly honest and unflinching, this is the ultimate story of a family tragedy.

Becky: The Heartbreaking Story of Becky Watts by Her Father Darren Galsworthy