Becoming Charlemagne: Europe, Baghdad, and the Empires of A.D. 800 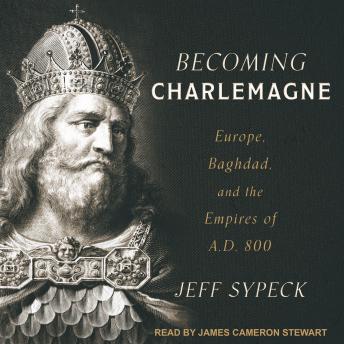 On Christmas morning in the year 800, Pope Leo III placed the crown of imperial Rome on the brow of a Germanic king named Karl-a gesture that enabled the man later hailed as Charlemagne to claim his empire and forever shape the destiny of Europe. Becoming Charlemagne tells the story of the international power struggle that led to this world-changing event, illuminating an era that has long been overshadowed by myth.

For 1,200 years, the deeds of Charlemagne inspired kings and crusaders, the conquests of Napoleon and Hitler, and the optimistic architects of the European Union. In this engaging narrative, Jeff Sypeck crafts a vivid portrait of the ruler who became a legend, while evoking a long-ago world of kings, caliphs, merchants, and monks. Transporting listeners far beyond Europe to the glittering palaces of Constantinople and the streets of medieval Baghdad, Becoming Charlemagne brings alive an age of empire building that continues to resonate to this day.

Becoming Charlemagne: Europe, Baghdad, and the Empires of A.D. 800