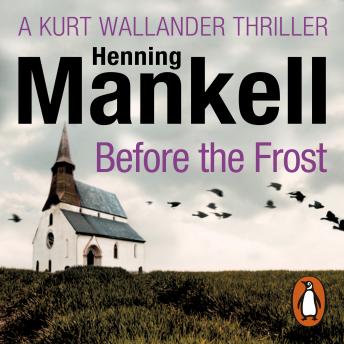 The leader of a religious cult in Guyana instigates a mass suicide. He succeeds in killing himself and his whole flock of worshippers, save one. One man escapes. In the wood in the country land outside Ystad, the police make an horrific discovery: a severed head, and hands locked together in an attitude of prayer. A Bible lies at the victim's side, handwritten corrections and amendments on every page. A string of incidents, including attacks on domestic animals, has been taking place and Inspector Wallander fears that these events could be the prelude to attacks on humans on a much greater scale. Linda Wallander, preparing to join the Ystad police force, arrives at the station. Showing all the hallmarks of her father - the maverick approach, the flaring temper - she becomes involved in the case and in the process has to confront a group of extremists bent on punishing the world's sinners. Before the Frost is a totally compelling and atmospheric crime story.