A Beginning at the End 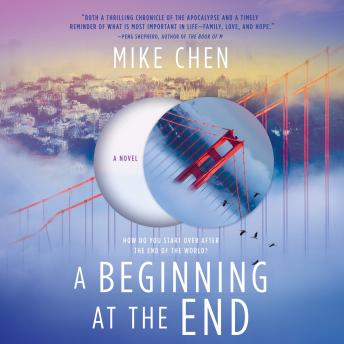 Featured in Polygon's Best of 2020

“The best kind of dystopian novel: one rooted deeply in the hearts of his characters and emphasizing hope and connection over fear.… Compelling, realistic, and impossible to put down.” —Booklist

Four survivors come together as the country rebuilds in the aftermath of a devastating pandemic. A character-driven postapocalyptic suspense with an intimate, hopeful look at how people can move forward by creating something better.

Six years after a virus wiped out most of the planet’s population, former pop star Moira is living under a new identity to escape her past—until her domineering father launches a sweeping public search to track her down. Desperate for a fresh start herself, jaded event planner Krista navigates the world for those still too traumatized to go outside, but she never reaches out on her own behalf. Rob has tried to protect his daughter, Sunny, by keeping a heartbreaking secret, but when strict government rules threaten to separate parent and child, Rob needs to prove himself worthy in the city’s eyes by connecting with people again.

Krista, Moira, Rob and Sunny meet by circumstance and their lives begin to twine together. When reports of another outbreak throw the fragile society into panic, the friends are forced to finally face everything that came before—and everything they still stand to lose. Because sometimes having one person is enough to keep the world going.

“A slice-of-life at the end of the world, tender, character-driven, and gentle—which makes it feel all the more terrifyingly plausible…. profoundly subversive and honest… This book is never bleak. Instead, hope reverberates through every character and plotline.” –Tor.com on A Beginning at the End

Beginning at the End