Behind Enemy Lines: The True Story of a French Jewish Spy in Nazi Germany 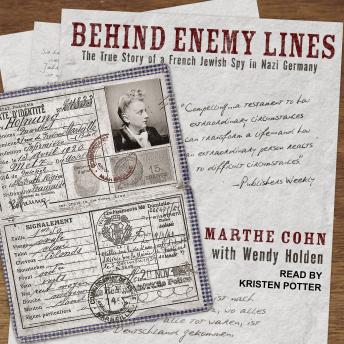 Marthe Cohn was a young Jewish woman living just across the German border in France when Hitler rose to power. Her family sheltered Jews fleeing the Nazis, including Jewish children sent away by their terrified parents. But soon her homeland was also under Nazi rule. As the Nazi occupation escalated, Marthe's sister was arrested and sent to Auschwitz and the rest of her family was forced to flee to the south of France.

Always a fighter, Marthe joined the French Army and became a member of the intelligence service of the French First Army. Marthe, using her perfect German accent and blond hair to pose as a young German nurse who was desperately trying to obtain word of a fictional fiance, would slip behind enemy lines to retrieve inside information about Nazi troop movements. By traveling throughout the countryside and approaching troops sympathetic to her plight-risking death every time she did so-she learned where they were going next and was able to alert Allied commanders.

Behind Enemy Lines: The True Story of a French Jewish Spy in Nazi Germany