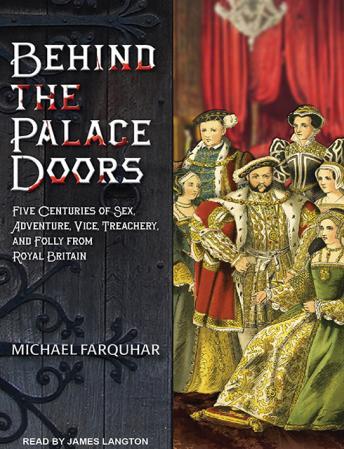 Behind the Palace Doors: Five Centuries of Sex, Adventure, Vice, Treachery, and Folly from Royal Britain

Beleaguered by scandal, betrayed by faithless spouses, bedeviled by ambitious children, the kings and queens of Great Britain have been many things, but they have never been dull. Some sacrificed everything for love, while others met a cruel fate at the edge of an axman's blade.

Behind the Palace Doors features stories covering every monarch, from randy Henry VIII to reserved Elizabeth II; debunks historical myths; serves up surprising anecdotes; and covers four family trees spanning every royal house, from the Tudors to the Windsors. From the truth behind the supposed madness of King George to Queen Victoria's surprisingly daring taste in sculpture, Behind the Palace Doors ventures beyond the rumors to tell the unvarnished history of Britain's monarchs, highlighting the unique mix of tragedy, comedy, romance, heroism, and incompetence that has made the British throne a seat of such unparalleled fascination.

Behind the Palace Doors: Five Centuries of Sex, Adventure, Vice, Treachery, and Folly from Royal Britain