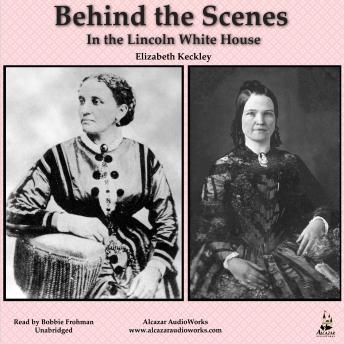 Behind the Scenes in the Lincoln White House

A former slave who became a successful dressmaker with her own business, became the dresser, dressmaker and confidante to Mary Todd Lincoln during Abraham Lincoln's presidential adminstration. Behind the Scenes tells the story of the rise of Elizabeth Keckley from abused slave to independent business woman to friend of the First Lady of the Land during the Civil War.

AUTHOR
Elizabeth Keckley
Elizabeth Hobbs Keckley (1818-1907) was a slave for more than 40 years and became a reknown seamstress, activist and author. The daughter of a house slave and her master, Keckley was taught to read and write, which was illegal and a rare priviledge. But her status did not protect her from a life of work that began at four years old and included severe abuse from her master's wife.

After purchasing her freedom as an adult, Keckley moved to Washington DC and her sewing talents soon garnered an impressive clientele of affluent legislators. Keckley's reknown brought her to the attention of Mary Todd Lincoln, and they immediately formed a strong bond.

Keckley met Mary Todd Lincoln on the day of Abraham's first inauguration and spent the next 6 years as the personal dressmaker and dresser for the First Lady. They remained close after the Lincolns left Washington. In an unfortunate attempt to help the nearly destitute former first lady, Keckley published her memoirs detailing the private lives of her owners and later the Lincolns.

The immediate reaction to Behind the Scenes was catastrophic for Keckley, Mary Todd Lincoln felt betrayed and attacked and refused to speak to her, her elite dressmaking clientele left her and critics everywhere exorciated Keckley for her ""honesty"". Keckley never fully recovered from the scandal and died alone and destitute.
"