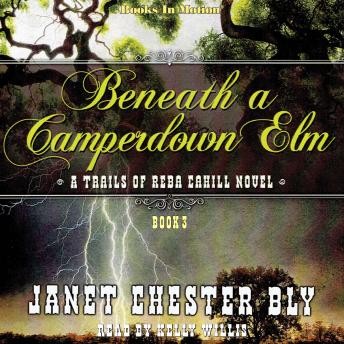 Beneath a Camperdown Elm: The Trails of Reba Cahill Series, Book 3

#3 of The Trails of Reba Cahill Series

Reba's scary stalker is locked up in jail. She finally snatches a rancher fiancé. Her runaway mother returns home. Reba has everything she ever wanted. But Grandma Pearl has disappeared! Is Reba about to lose it all? In August 1991, at Road's End, Idaho, three generations of women travel separate journeys of the heart. Reba Mae Cahill brims with joy. Her life's perfect. She's finally bringing her prodigal mother, Hanna Jo, home to Road's End from a Reno mental institute. With them is Jace McKane, her fiancé, who promises to help fight the unjust lawsuit that threatens the family ranch. He wants a new start, away from his unscrupulous father and all his drama. Just as Reba's getting Jace trained to become her rancher husband, she discovers Grandma Pearl betrayed her once again, in a way that also harms her mother. Reba believes she's lost everything-her career, her identity, her lifelong pursuit, and her main reason for marrying Jace. When Jace returns to California to bail out his father and pursue Quigley, a psychotic killer, who escaped from prison, she wonders if he'll ever return to Road's End? Then Hanna Jo claims she sees alleged wild horses in the mountain valleys as she learns her son and ex-husband's fishing boat sank in an Alaskan sea. Can Reba keep her from flipping out for good? As Grandma Pearl struggles with guilt, health issues, and finding purpose for the rest of her life, will the new church building project provide an answer? Meanwhile, twenty-one-year-old Scottish twin tourists, Archie and Wynda MacKenzie, mesmerize the town with their trick biking skills and charming accents. Reba's not sure they're all they claim to be. And someone harasses Reba with letters and phone calls. What are they really after? Will any of the answers be found in the mysteries of an old Scottish elm?