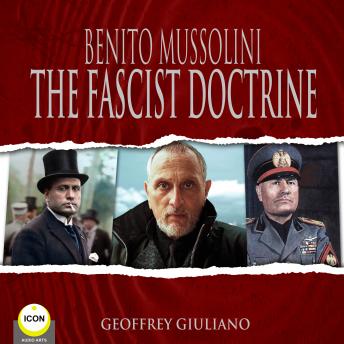 "It's better to live one day as a lion than 100 years as a sheep."
'I am the most terrible animal that's ever existed.'
"We become strongest, I feel, when we have no friends upon whom to lean, or to look for moral guidance.' "MUSSOLINI
Benito Amilcare Andrea Mussolini born on July 29, 1883 who went by the nickname "Il Duce" ("the Leader"), was a deeply unbalanced tyrannical Italian dictator who created the dreaded Fascist Party in 1919. Eventually, he held all power in Italy as the country's prime minister from 1922 to 1943. An ardent socialist as a youth, Mussolini followed in his father's political footsteps but was expelled by the party for his overt support of World War I. As an evil dictator during World War II (even murdering his own son by lethal injection) he greatly overextended his forces and was eventually killed by his own people in Mezzegra, Italy. Here, for the first time, are the words of the great dictator himself in his twisted manifesto on the political movement he started and is still so feared to this very day.
GEOFFREY GIULIANO is the author of thirty two internationally best selling books published by the biggest publishers in the world from 1984 until today. He is also an acclaimed Hollywood film actor, director, designer, and is the voice on over 500 popular audiobooks.
Series producer Avalon Giuliano in New York
Edited and mixed by Macc Kay in Bangkok
ICON intern Eden Garret Giuliano