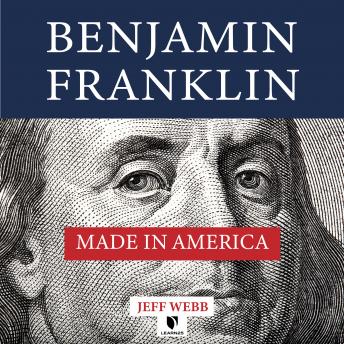 Benjamin Franklin: Made in America

Called the "First American" and credited with "Inventing America," Benjamin Franklin lived a life that invites hyperbole. Few rival Franklin for his range of accomplishment across a number of domains of human endeavor, and few lived a life of such consequence in one of history's most consequential eras. In reality, Franklin's true story eclipses the myths that pervade his legacy.

Benjamin Franklin: Made in America traces the fascinating twists and turns that make this Founding Father's story so remarkable. In 15 dynamic audio lectures, award-winning American history professor Jeffrey Webb explores Franklin's career beginning with his post as a young newspaperman and continuing into his leadership roles on the frontiers of cultural, intellectual, political, and scientific developments.

Webb elucidates pivotal moments when Benjamin's contributions helped determine the fate of the continent: the Albany Congress, the Stamp Act debates, and the Treaty of Paris negotiations. He then explores Franklin's significant contributions as a transformational statesman and innovator who discovered the lightning rod, became the country's first successful publisher, and created the public library system.

Perhaps most compelling, Webb shows how Franklin lent his particular genius to champion ideas considered radical in his time: free press and free speech, scientific and technological progress, and the gospel of individual self-improvement.

As you travel throughout Franklin's life with Webb, you'll witness the making of the modern world.

Benjamin Franklin: Made in America