Benny Goodman and Glenn Miller: The Lives and Careers of America's Most Famous Big Band Leaders 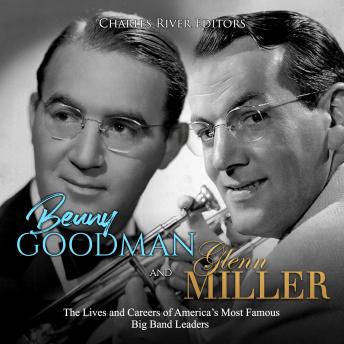 When the phrase "the King" is used in the context of American music, most people think of Elvis Presley, but Presley was just a baby when the title was first conferred upon Benny Goodman as the King of Swing in 1935. The Swing Era was a magical period in American history between the hedonism of the Roaring Twenties and the rebelliousness sparked by rock music beginning in the 1950s. Swing music was rooted in ragtime, blues, and jazz music that had long been popular in African American enclaves in Chicago, St. Louis, Kansas City, and New Orleans. Swing took the entire nation by storm thanks in large part to Benny Goodman and his bands, earning Goodman the nearly undisputed title of the King of Swing. Apart from a few hiatuses to tend his health and his growing family, Goodman remained a consistently active musician literally right up until his death in 1986 at the age of 77. Somewhat fittingly, he died in his study with his clarinet next to him and a Brahms sonata on a music stand nearby.
Though it may be hard to fathom in the wake of Elvis Presley and popular rock bands like the Beatles, the early 20th century featured a burgeoning music sales industry that was dominated in ways that nobody would ever reach again, including the Fab 4. While Elvis and the Beatles had a combined 71 Top 10 hits over their lengthy careers, Glenn Miller had 16 records reach #1, and he compiled 69 Top 10 hits, all in the span of four years before he had turned 40. Like any music pioneer, Miller and his band were often criticized for not being true to the roots of the music they performed, even as they perfected a sound that captivated the country. In short order, Miller and his music influenced legends ranging from Benny Goodman to Louis Armstrong.
Miller was the most popular big band leader in the United States when he walked away from his orchestra to enlist in the U.S. Army. World War II was raging, and Miller was determined to fulfill his patriotic duty

Benny Goodman and Glenn Miller: The Lives and Careers of America's Most Famous Big Band Leaders