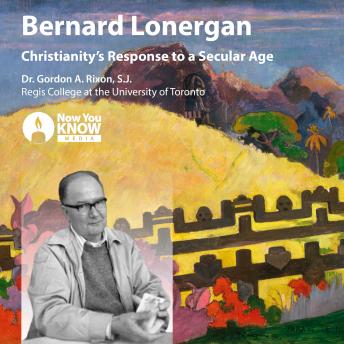 Written By: Gordon A. Rixon

Narrated By: Gordon A. Rixon

Few Christian thinkers have brought such an array of intellectual, scientific, spiritual, and religious resources to bear on faith and society as Bernard Lonergan (1904-1984). A Jesuit philosopher and theologian, Lonergan worked to integrate faith with the promotion of justice.

Taught by one of the world’s leading experts on Lonergan, this 12-lecture course introduces you to the breadth of Lonergan’s thought. You will focus on his method of better knowing yourself through your web of natural, social, and religious “ecologies.”

Dr. Gordon Rixon, a professor at the University of Toronto, helps you arrive at abiding truths through personal discovery, critical reflection, and introspection. In the process, you’ll run the gamut of natural, human, and theological sciences, contemplating such topics as: the artwork of Paul Gauguin, Vincent van Gogh, and Käthe Kollwitz; the physiology and spirituality of breathing; the metaphysics of knowledge as explained by St. Thomas Aquinas; the social impact of climate change; the mystery of the Incarnation as defined by the Council of Chalcedon; and the joy of contemporary evangelization as described in Pope Francis’s Evangelii Gaudium. You’ll walk away with a transformed understanding of Lonergan’s legacy and significance, emboldened by a religious faith that acknowledges scientific inquiry while recognizing the beauty of the beguiling unknown.

by Gordon A. Rixon

This title is due for release on June 15, 2018
We'll send you an email as soon as it is available!